The Murasame is a variable air-superiority mobile suit developed as a successor to the M1 Astray, and designed to operate equally well on Earth and in space. It is able to quickly switch between mobile suit mode, where it is most maneuverable, and an aircraft-like flight mode which maximizes its speed and acceleration. This versatility makes it an especially effective aerial mobile suit, nearly on par with ZAFT's newer ZGMF-2000 GOUF Ignited or ZGMF-X23S Saviour Gundam.

The Murasame's armament consists of a handheld beam rifle and beam saber, along with head-mounted CIWS, which are its main weapons in mobile suit mode. In flight mode it is armed with four single-shot missile launchers, and a back-mounted beam cannon. It also has a pair of hardpoints on its wings for additional missiles or propellant tanks, similarly to the Alliance's Jet Dagger. Its beam rifle can also be used as a fixed beam cannon in flight mode.

In its head, the Murasame mounts two M2M5D 12.5mm CIWS guns, which are used to shoot down incoming missiles or close enemy units. They are lower caliber than the "Igelstellungs" used by the Astray, but their firing rate is slightly higher, and the smaller caliber allows for a much greater supply of ammunition to be stored.

For close combat, the Murasame is equipped with a single Type 70J Kai beam saber, which is usually mounted on the left hip of the suit if not in use.

Besides the high-energy beam cannon, the only other ranged beam weapon of the Murasame is a Type 72 Kai "Ikazuchi" beam rifle. Unlike most of the Murasame's weapons, this rifle can not only be used in mobile suit mode but also in mobile armor configuration, during which it is mounted beneath the right wing.

Mounted to each of the Murasame's wings is an additional pair of CIWS guns, for close-range MS and missile interception.

For heavier firepower over greater distances, one Type 72 high-energy beam cannon is mounted on the back of the mobile suit. Mounted in the fin on the Murasame's back, it is comparable to the beam rifle, though its power is slightly greater. This weapon is omitted in the Murasame Recon Type, with the sensor radome taking its place.

The Murasame's most powerful ranged weapon is its four-tube Type-66A "Hayate" Anti-Air missile launcher mounted in its front skirt armor, which is on the underside of its flight mode. An additional four missiles can be mounted to hardpoints underneath its wings.

During the First Junius War, the Orb Union used data it had acquired from its collaboration with the Atlantic Federation's G-Project to develop its own mobile suit, the result of which was the MBF-M1 Astray. In the months following the war's end, it became apparent that the Orb Union's lack of aerial combat mobile suits presented a weakness should either ZAFT or the Alliance attack the nation again.

Thus, development was begun on a project intended to create an aerial-superiority mobile suit to counter ZAFT's and the Alliance's aerial units, the result of which would eventually yield the Murasame. In the interim, all of Orb's existing M1 Astrays were upgraded into the M1 Astray Flight Type. A few short years later, the significantly superior Murasame was rolled out.

Unlike its predecessor, the Murasame is built on a variable frame, allowing it to quickly switch between mobile suit mode and a high-speed, aircraft-like flight mode. This gives the Murasame particularly high mobility in the Earth's atmoshpere, making it one of the most capable aerial mobile suits developed.

The Murasame's armament is fairly balanced, consisting of a beam rifle and beam saber, supplemented by a beam cannon mounted to its back and four single-shot missile tubes built into its front waist, albeit the latter weapons are usable only in flight mode. It also has a pair of hardpoints on its wings for additional missiles or propellant tanks, similarly to the Alliance's Jet Dagger.

Introduced at the beginning of CE 74, the Murasame is indisputably one of the highest-performing air-superiority mobile suit in existence, able to engage the newer ZGMF-2000 GOUF Ignited on nearly equal terms. Though it is slower and less heavily-armed, it is nonetheless able to keep up even with the state-of-the-art ZGMF-X23S Saviour Gundam. A reconnaissance version, the MVF-M11R Murasame Reconnaissance Type, is also produced, which removes the dorsal beam cannon to mount a long-range multi-spectrum sensor radome akin to that of ZAFT's AWACS DINN.

A custom-colored Murasame would be used by Athrun Zala, under the alias "Alex Dino", until its destruction during the Break the World Incident. Following this, Murasames would see combat against ZAFT's LHM-BB01 Minerva in the Sea of Marmara as well as off the coast of Crete, when an Orb fleet is sent to reinforce the Alliance forces by the Seiran Family, contravening orders by Cagalli Yula Athha. After this, Murasames would once again face ZAFT forces during Operation Fury, ZAFT's attack on Orb aimed at capturing Jibril. Murasames, launching from the Orb Space Fleet's Izumo-class battleships, would also participate in the Second Battle of Daedalus, which would be the final battle of the Second Junius War. 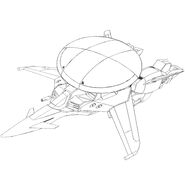 Retrieved from "https://gsdestinyaltered.fandom.com/wiki/MVF-M11C_Murasame?oldid=5291"
Community content is available under CC-BY-SA unless otherwise noted.