The TMF/A-802 BuCUE is a mobile suit designed for ground assaults. Unlike other ZAFT mobile suits the BuCUE is a quadruped, looking more like a dog than a human. The four-legged design distributes the weight of the BuCUE, giving the mobile suit greater balance and mobility on the ground then any other ZAFT mobile suit. Additionally each leg is equipped with a caterpillar-treads. BuCUE can enter a "tank-mode" by crouching down and moving on these treads, giving the BuCUE greater speed and a smaller profile. With its configuration the BuCUE is particularly effective in terrains that are difficult for standard mobile suits, such as sandy deserts or snowy fields.

Because BuCUE do not have manipulator hands they cannot use standard mobile suits weapons. Instead the BuCUE possess a turret mount on its back that can mount a variety of different weapons. When introduced, the BuCUE had the option of equipping either a two-barreled 450mm railgun or a 13-tube 400mm missile launcher. Later-model BuCUEs were fitted with a dual beam saber mounted to the head.

By CE 73, most BuCUEs were equipped, in lieu of the railgun, with a double-barreled 115mm beam cannon, originally developed for and equipped on the TMF/A-803 LaGOWE. However, that year also saw the introduction of a more comprehensive upgrade to the BuCUE, the TMF/A-802W2 Kerberos BuCUE Hound, which eschews the BuCUE's more conventional armaments in favor of a pair of additional "heads" on long, articulated necks, each of which mounted a single beam cannon. The Kerberos BuCUE additionally equipped a greater number of beam blades, giving it higher capabilities in close-range combat. Combined with a general increase in its performance and a somewhat more powerful generator, this made the Kerberos BuCUE even more dangerous than its predecessor. Both the original and Kerberos BuCUE remain in service as of CE 75, seeing action on several theaters in the new war against the Alliance.

The BuCUE's only fixed weapon is a dual beam saber mounted in its head, with one blade on each side of the head.

Originally developed for the prototype TMF/A-803 LaGOWE, this dual beam cannon is now equipped to many BuCUEs instead of the railgun.

The Kerberos BuCUE Hound is equipped with a large number of beam blades, giving it impressive close combat abilities. The BuCUE's own main head mounts a pair of short beam blades, oriented downwards like fangs, in addition to a beam longer blade mounted underneath its chin which faces forward and an additional beam blade on each side of the head, which faces outwards much like the twin beam saber of its predecessor. The two additional "heads" mounted on its back likewise mount a single beam blade facing straight forward, mounted atop its head like a horn, as well as a second blade, which faces laterally outwards.

Each of the two "heads" on the Kerberos BuCUE's back mounts a single beam cannon, comparable in firepower to the 115mm dual beam cannon of the standard BuCUE

Mounted on the BuCUE's back, this turret is what allows the BuCUE to equip its main weapon, which can be swapped out for different needs in combat. This particular feature is eliminated in the Kerberos BuCUE, whose back-mounted equipment is permanently mounted to its main body.

While invading Earth during the First Junius War, ZAFT created the BuCUE, a quadrupedal mobile suit used for ground combat. Combining heavy armor with mobility far higher than anything the Alliance had in its arsenal at the time, this very unusual mobile suit proved one of the key factors in planetary battle operations and a major factor in ZAFT's early success on Earth. Even once the Alliance acquired mobile suits of their own with the rollout of the GAT-01 Strike Dagger, the BuCUE remained superior overall in ground combat due to its high mobility on the ground.

Four years later, the BuCUE remains in service in ZAFT's few bases on Earth, having been fitted with ranged beam weapons as an option in addition to its existing standard armaments. Additionally, the improved Kerberos BuCUE Hound, optimized for anti-MS combat and with overall performance even higher than that of the BuCUE itself.

In the aftermath of the Break the World Incident, in which the remains of Junius Seven were dropped onto Earth by rogue ZAFT forces loyal to the late Patrick Zala, a team of ZAFT mobile suits, consisting primarily of a GINN and several GaZuOOTs and black Kerberos BuCUEs, attacked a refugee camp in the Eurasian Federation. Alliance Special Forces ultimately defeated them, though one of the three pilots dispatched was killed when BuCUEs almost literally mauled his Dagger.

Both the BuCUE and Kerberos BuCUE would continue to see action throughout the subsequent war, notably in the first failed attack on the Alliance's Lohengrin Gate, where they were decimated by the Alliance's positron cannon after failing to destroy the mobile armor Gells-Ghe.  BuCUEs would also participate in the attempts to stop the rampage of the GFAS-X1 Destroy, and later in the attack on the Archangel during the early stages of Operation Angel Down. The BuCUE's role in later engagements would be limited, but it would remain in service through and beyond the war's end. However, there are plans to retire the BuCUE, and late in the war a potential replacement is developed in the YMF-3000 DOM Trooper . 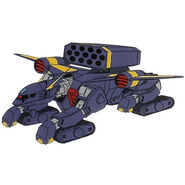 Beam Cannon-equipped BuCUE, in the colors used by the forces that attacked Bandar-e-Abbas 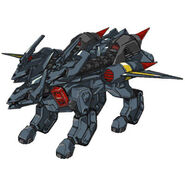 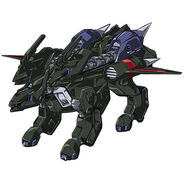 Kerberos BuCUE, in the colors used by the forces that attacked Bandar-e-Abbas

Community content is available under CC-BY-SA unless otherwise noted.