Developed based on the ZGMF-1000 ZAKU Warrior as part of the New Millenium Project, the DOM Trooper shares numerous internal components with its predecessor despite its drastically different appearance. Unlike the ZGMF-2000 GOUF Ignited, the DOM Trooper retains the ZAKU's ability to use optional Wizard Packs to further increase its combat capabilities.

The DOM Trooper is equipped with a vast array of thrusters, including a set of thrusters in its legs and rear waist that allow it to hover over the ground, moving with a speed slightly higher than that of the BuCUE and with significantly higher maneuverability. Additionally, the DOM Trooper has significantly thicker armor than its predecessors - armor that is at least on par with the much slower GaZuOOT. This heavy armor grants it excellent defensive capabilities, which are further augmented by the addition of a pair of beam shields - the first production-line New Millennium series machine to equip this technology. All of this combines to make the DOM Trooper a devastating opponent, superior to any production-model mobile suit to date.

The DOM Trooper's only default close-quarters weapon, a long-handled, high-output beam saber, with a slightly longer and more powerful blade than most other weapons of its type.

A pair of rapid-fire, shell-firing guns mounted in the DOM Trooper's torso, primarily for use against missiles and light aircraft.

This experimental beam weapon does not fire a single, cohesive beam the way most beam weapons do. Instead, it fires a widely scattered shot, similar to a shotgun blast. The end result is that while it lacks the range and penetrating power of a conventional beam rifle, it causes much more widespread damage, and at close range is still sufficient to cause crippling damage to most mass-produced mobile suits.

This long-shafted beam weapon has a considerably greater range than most beam sabers, and can be optionally equipped by the DOM Trooper. Originally developed for the ZAKU Warrior, the long beam axe has a twin-headed design with a beam blade on both sides.

The Gunner Wizard mounts a single launcher, identical to the two launchers mounted to the Blaze Wizard Pack

Mounted to the Tempest Wizard are two MMI-M826 "Hydra" Gatling beam cannons. These weapons possess a very high rate of fire, though the power of each individual shot is somewhat decreased. Nonetheless, they are highly effective anti-MS weapons, easily capable of shredding the armor of most mobile suits.

Like the ZAKU Warrior and GOUF Ignited, the DOM Trooper's cockpit block is built inside an armored escape pod loosely similar to that of the ZGMF-X56S Impulse Gundam

A defensive system derived from the same underlying technology as beam sabers. A small generator on the back of each of the DOM Trooper's forearms creates a powerful, rectangular-shaped beam shield capable of deflecting most attacks. The shield it generates is sufficiently powerful to block the weapons of nearly any mobile suit or mobile armor.

In late CE 74, ZAFT began the New Millenium Project: a general restructuring of its forces, the intent of which was to reorganize ZAFT into a fighting force capable of effectively countering any eventual conflict while remaining within the strict limits set down by the Junius Seven Treaty of 72. Since the Treaty banned the military use of the Neutron Jammer Cancellers, these new Gundams used conventional battery power instead, however, with the technological improvements over the years since the war's end, output and efficiency of battery power had tremendously improved. As part of the project, several new technologies were developed to adapt to the Treaty's restrictions. One of the priorities of the new Millenium Project was the creation of a new model mass-production mobile suit that would be capable of adapting its combat capabilities to suit a variety of different potential situations. This new model would also be equipped with an escape system allowing the pilot to eject from and escape the unit if if were to become critically damaged.

In the beginning of CE 75, ZAFT rolls out the ZGMF-1000 ZAKU Warrior, the first trial mass-production machine developed under this project. Initially only a few dozen machines are produced, assigned to unit commanders and veteran pilots. In the subsequent months, ZAFT would roll out a second machine based on the ZAKU, the aerial combat unit ZGMF-2000 GOUF Ignited. Later still, a third machine is created.

Though visually drastically different from its predecessors, internally the DOM Trooper does still share numerous internal components with other suits of the New Millenium series. A limited-production prototype, it is produced in small numbers, much as the ZAKU itself was at the time it was introduced. The DOM Trooper's primary purpose is ground combat, though like all New Millenium-series mobile suits it is equally capable of combat in space. As such, it is designed to be able to hover at high speed despite having the heaviest armor of any mobile suit in the New Millennium Series. This as well as its heavy armor would allow it to possibly replace both the BuCUE and the GaZuOOT, which despite their age continue to form the backbone of ZAFT's forces on Earth.

Though the DOM Trooper is capable of equipping Wizard Packs, its bulk and mass render it incapable of atmospheric flight, even if equipped with the Tempest Wizard, which in any case is no longer being produced by the time of the DOM Trooper's introduction. Nonetheless, a single Tempest DOM Trooper would be fielded in space, where the backpack's thruster arrays significantly increase the DOM's already high speed and maneuverability, piloted by Heine Westenfluss. Much more commonly, it will be equipped with Blaze or Gunner Wizards, or else deployed in base configuration, without a Wizard Pack.

While the DOM Trooper proves itself in combat in the final months of the second war, the conflict ends before the DOM Trooper can enter mass production. Nonetheless, a small contingent of them are assigned to the Minerva, personally delivered to the ship at ZAFT's Gilbraltar base by Ezalia Joule alongside the new ZGMF-YX29R Knight Saviour and ZGMF-X42R Destiny Gundams. The two Gundams are assigned to Athrun and Shinn, while one of the DOM Troopers is assigned to Yzak Joule and already painted in his personal colors. All machines make their first combat sortie during Operation Ragnarok, a joint ZAFT/Eurasian Federation attack on the Atlantic Federation military HQ and Logos stronghold "Heaven's Base", in Iceland. Three of the DOM Troopers would be stolen by the Clyne Faction and delivered to Orb, piloted by ex-ZAFT pilots Hilda Harken, Mars Simeon, and Herbert Von Reinhard. These would also be custom-painted in black-and-purple color scheme. During the Second Battle of Daedalus, a custom orange DOM Trooper is also piloted by Heine Westenfluss, though it is destroyed in combat by the more heavily armed Knight Saviour. 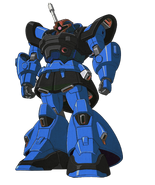 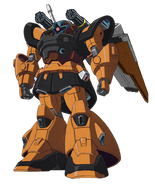 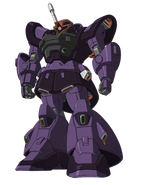 MF-101C escape pod
Add a photo to this gallery

Retrieved from "https://gsdestinyaltered.fandom.com/wiki/YMF-3000_DOM_Trooper?oldid=5449"
Community content is available under CC-BY-SA unless otherwise noted.