The ZGMF-X23S Saviour Gundam is a prototype transformable aerial-superiority combat mobile weapon developed by ZAFT. It is piloted by Athrun Zala

Developed in parallel with the ZGMF-X56S Impulse Gundam, the Saviour is technologically similar to the Impulse, though completely different conceptually. Whereas the Impulse is designed to vary its equipment to adapt to multiple different combat scenarios, the Saviour is designed to be able to operate equally well in all theaters of combat. Developed in part from development data from the ZGMF-X09A Justice and ZGMF-X10A Freedom, it also used technological and combat data from the GAT-X303 Aegis Gundam, resulting in a high-mobility air combat unit with impressive firepower. Like all ZAFT mobile suits developed under the New Millennium Project, the Saviour is equipped with an escape pod, a simplified version of the YFX-M56S Core Splendor used in the Impulse. However, it lacks the Impulse's complex Core Block System, instead having a variable-type frame designed as a simplified and more streamlined version of that of the Aegis.

The Saviour's speed and maneuverability aside, its firepower rivals that of the famous Freedom Gundam: Its main weapon is a pair of "Amfortas" high-output plasma beam cannons, mounted on its backpack and swiveled underneath the arm to fire. These are refined, more energy-efficient versions of the "Balaena" plasma cannons of the Freedom, though their firepower is equal. The same type of cannon is also used in the Blast Impulse, but the Saviour's cannons mount neither the missile launcher nor the beam javelin storage rack found in its sibling unit. Instead, it is further armed with a second cannon, a high-output beam rifle-class cannon developed from the Justice's Fortis beam cannons. In addition to this, the Saviour sports a pair of beam sabers of the same type as the Force Impulse's, and a beam rifle. The Saviour's beam rifle has one unusual characteristic that is not shared with the Impulse: A second beam saber blade is integrated into it, below the barrel itself, allowing it to function as a last-ditch melée weapon if need be. Additionally, the Saviour is armed with a pair of 20mm CIWS in its head in mobile suit mode, similar to the chest-mounted CIWS of the Impulse. In flight mode, it has instead a pair of 76mm machineguns of the same type as the GuAIZ's CIWS.

Usable only in mobile suit mode, the MMI-GAU25A 20mm CIWS are a standard shell-firing "close in weapons system" mounted in the mobile suit's head and is designed to shoot down small fast moving targets such a missiles or light aircraft.

The pair of "Amfortas" plasma beam cannons are the Saviour's most powerful weapons. The cannons are attached to the Saviour's backpack and fixed forward in flight mode, whereas in mobile suit mode they are fired below the arm. They are equal in power to the Freedom's "Balaena" or the "Scylla" cannon of Alliance mobile suits.

The only close combat armament of the Saviour are two MA-M941 "Vajra" beam sabers, which, when not in use, are stored in the shoulders of the suit.

The beam rifle is an optional hand armament that is used for ranged combat. When in flight mode, it is mounted laterally on the outside of the Saviour's shoulder. Unlike most beam rifles, this one also serves as a close-combat weapon in mobile suit mode, as it mounts a beam blade underneath the rifle's barrel.

The Saviour, like the Impulse, is equipped with Variable Phase-Shift Armor, a refined and more energy-efficient version of Phase-Shift Armor, which is able to automatically adjust its settings for optimum power efficiency, resulting in the mobile suit's color changing. However, the Saviour's VPS is never changed from its default configuration.

The Saviour is equipped to use the experimental Deuterion Beam System to remotely recharge its battery, allowing it to theoretically remain in combat far longer without having to return to its mother ship to recharge.

In late CE 73, ZAFT began development of new prototype Gundams as part of the general restructuring of its forces under the New Millenium Project, the intent of which was to reorganize ZAFT into a fighting force capable of effectively countering any eventual conflict while remaining within the strict limits set down by the Junius Seven Treaty of 72. Since the Treaty banned the military use of the Neutron Jammer Cancellers, these new Gundams used conventional battery power instead. However, with the technological improvements over the years since the war's end, output and efficiency of battery power has tremendously improved. As part of the project, several new technologies were developed to adapt to the Treaty's restrictions. One such technology was Variable Phase Shift armor, a new version of the older Phase-Shift technology. This armor is less energy intensive than the old variant and can also automatically change the strength and thus the energy consumption of the armor. To cope with the fact that nuclear engines on mobile suits were now forbidden, the Deuterion Beam Energy Transfer System was developed, which allows a suit of the Second Stage series to immediately recharge its battery by receiving energy through a deuterion beam from a ship equipped with this system. Additionally, the Second Stage series, like all other mobile suits developed under the New Millenium project, were equipped with escape systems allowing the pilot to eject from and escape the unit if if were to become critically damaged. Another system created specifically for the Impulse were the Silhouette Packs, which are exchangeable backpacks similar to the Earth Alliance' Striker Packs.

In the beginning of CE 75, ZAFT rolled out the first two prototypes of this Second Stage series, one of which was the ZGMF-X23S Saviour Gundam, a transformable unit specializing in aerial combat. The Saviour was developed in large part from a mixture of development data from the ZGMF-X10A Freedom and ZGMF-X09A Justice Gundams, as well as design and combat data gathered from the captured GAT-X303 Aegis. The end result was a highly maneuverable air superiority unit with impressively high firepower.

Early in the development of the Saviour, an unarmed testbed unit is constructed for the purpose of stress tests of the frame during aerial maneuvers, as well as to refine its transformation mechanism. Based on the data accumulated in tests of this first test unit, the final prototype Saviour Gundam is constructed and rolled out. Whereas the Impulse and the ZAKU were developed at the new arsenal colony Armory One, the Saviour was developed separately in the PLANT homeland.

In late February of CE 75, after a group of pro-Zala renegades orchestrated the fall of Junius Seven to Earth, Bloody Valentine War veteran and ex-ZAFT ace Athrun Zala traveled to Aprilius One, where he met with Supreme Council Chairman Gilbert Durendal. There, Athrun reenlisted into ZAFT and was promoted to the élite FAITH detachment and assigned the Saviour, which he took to Earth, joining the crew of the new battleship Minerva and taking command of its mobile suit team. He would take the Saviour into combat against the Alliance several times, first in an attack on an outpost in the Gulnahan Ravine in western Eurasia, during which Athrun led the ship's mobile suit team in a diversionary attack on the base intended to occupy the attention of its defensive forces, including a new-model mobile armor, while Shinn's Impulse Gundam targets the base's primary weapon, a fixed "Lohengrin" positron cannon rendering the ravine impassable. The operation is a success, as Athrun succeeds in defeating the mobile armor and Shinn destroys the positron cannon, destroying the base and liberating an occupied town located behind it.

The Saviour would face the Freedom directly in two engagements, the first time in the Dardanelles, in a battle against a mix of Alliance ships and Orb vessels. During this battle, the Freedom destroys the Minerva's positron cannon, killing a number of the ship's crew and severely damaging it. Engaging Kira directly, fellow Minerva pilot Heine Westenfluss is killed, while the younger Rey Za Burrel is badly injured.

Not long afterwards, the repaired Minerva once again engages the Alliance/Orb fleet, and Athrun once again confronts the Freedom. During this battle, the Saviour is irrepairably damaged by the Freedom in combat, and Athrun is severely wounded.

The original test frame for the Saviour is subsequently brought up to combat specifications before being used as a a testbed unit for a number of experimental technologies, resulting in the significantly improved ZGMF-YX29R Knight Saviour Gundam. Once deemed combat-ready, the Knight Saviour would become Athrun's machine, which he would pilot until the war's end. 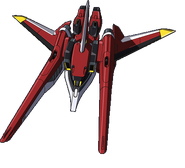 MF-101C escape pod
Add a photo to this gallery

Retrieved from "https://gsdestinyaltered.fandom.com/wiki/ZGMF-X23S_Saviour_Gundam?oldid=5452"
Community content is available under CC-BY-SA unless otherwise noted.